Karen has reached the finals of the Redken Urban Experiment and Hayley has reached the last ten in "The Guild Affinage Best of British Colour Challenge'. The finals to be held 22nd April 2007.

Serafina and Sam graduated from the Joshua Galvin Academy at a ceremony held at the Wella Centre,
London in March. Nicky Clark presented them both with their records of achievement, and Serafina being awarded Student of the Year. 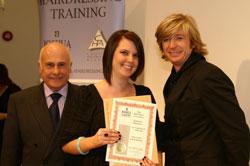